From robot cleaners to robo-chefs to entertainers: what kinds of robots are helping us fight COVID-19? 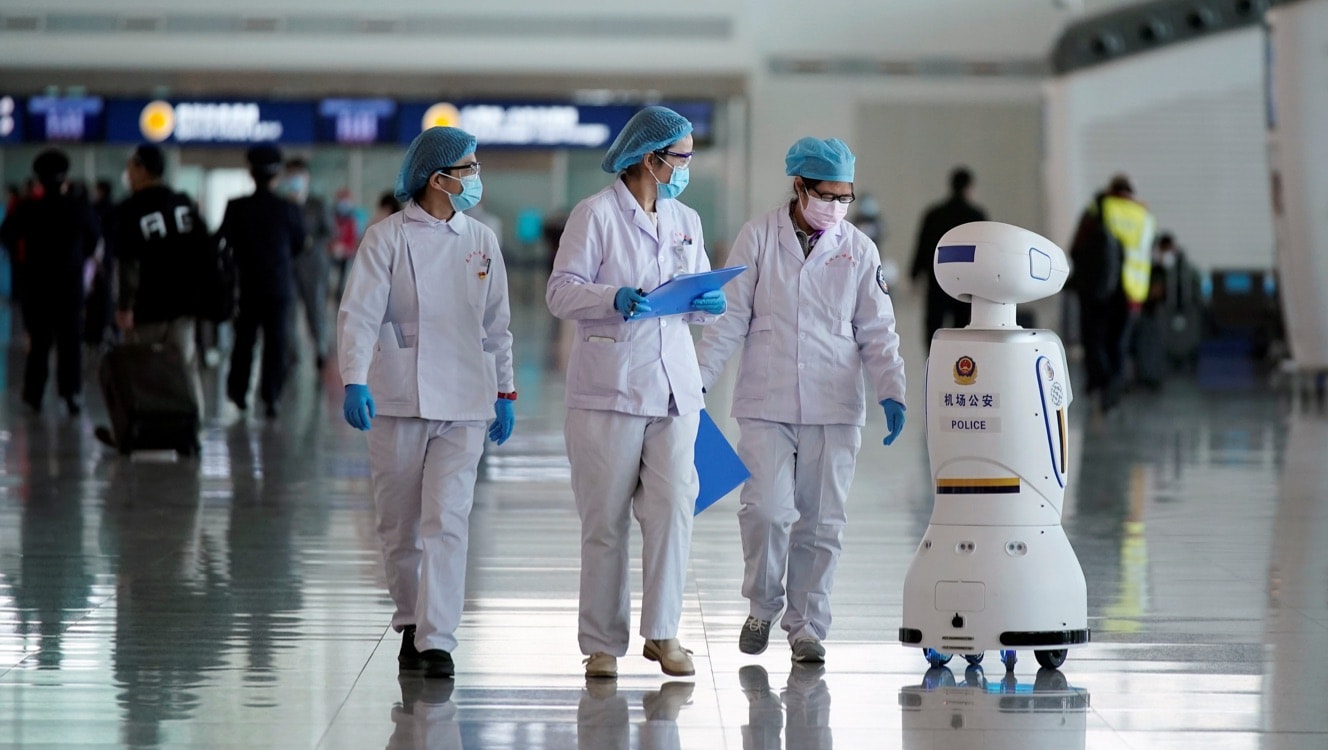 In terms of robotics, what’s happening today in the pandemic-stricken world reminds one of Isaac Asimov’s book The Naked Sun. In the novel, the Solarian people communicate strictly through holograms, avoid all physical contact, and have their chores performed by robots.

I wonder if this is the direction we’re headed in. =) While such extreme “robotization” is very unlikely in the near future, there will definitely be more robots everywhere as the result of COVID-19. And what kind of robots are we talking about, exactly?

Once COVID-19 started causing disruption to healthcare facilities all over the world, the demand for disinfection robots started to rise. These digital helpers fall into two main categories: UV-emitting bots and sanitizer-spraying bots.

Blue Ocean Robotics from Denmark is one of the carriers who has been experiencing a surge in orders recently. It started shipping autonomous UVD robots (ultraviolet disinfection robots) to China in February 2020. According to the company’s press release, its UV bots were deployed in all Chinese provinces, covering more than 2,000 hospitals. The model can be used to effectively disinfect hospitals, offices, shopping malls, and other public places. It emits concentrated UV-C light, which removes virtually all airborne viruses and bacteria in a typical ward within 10 minutes.

While ultraviolet-beaming robots have an upper hand when it comes to how quickly they can clean up, UV-C rays are harmful to humans and may cause burns. Another popular way of sanitizing hospitals and other public places is by employing disinfectant-spraying robots. These can be remotely controlled by humans or operate autonomously.

In Singapore, university researchers created the eXtreme Disinfection robot, also known as XDBOT. It has a six-axis arm, which allows it to reach awkward places and clean small objects like doorknobs and light switches. XDBOT’s nozzle discharges chemicals with a positive electrical charge, allowing them to gravitate towards not-yet-disinfected, negatively-charged surfaces. Last but not least, XDBOT is equipped with a LiDAR and HD cameras and can navigate a hospital ward semi-autonomously while its arm is controlled by a human operator.

Keenon Robotics, a Chinese company with the manufacturing capacity of at least 30,000 units per year (these are pre-COVID19 numbers), just unveiled a robot that can do both: beam germ-killing UVC rays and disperse sanitizer. The unique robot can auto-navigate spaces along preset routes and has three disinfection modes: just the UVC, just the sanitizer, or both at once.

Just recently, the robot came to Malpensa airport in Milan, Italy. Besides this model, Keenon carries about a dozen other products – all sharing the same navigation base. Since robots have been helping many countries implement social distancing, the company now has many orders to fulfill:

We are discussing partnership with lots of international corporations.

In the following months, more robots are expected to be deployed in the U.S., Canada, France, the United Kingdom, Spain, Portugal, Japan, Korea, Singapore, Kuwait, UAE, Saudi Arabia, and other places.

Since the current outbreak, the recycling industry has been struggling to keep employees safe, implement social distancing and, above all, motivate people (many of whom make $10/hour) to come to work despite the risks.

At the start of the epidemic, Shanghai-based Keenon Robotics Co. donated 16 “Little Peanut” robots to a hospital in Hangzhou, China. The robots can be used to deliver food and other items to patients infected with COVID-19.

XR-1 and other robots by CloudMinds

Another group of robots that’s played a noticeable role in COVID-19 response are those by CloudMinds, a manufacturer that operates in Beijing and California. The company modified some of its robots specifically to fight COVID-19. Among them are the humanoid XR-1 robot and the smart Transportation robot that delivers food and medicine to patients.

CloudMinds’ XR-1 can see, hear, and react in a human-like way. According to the manufacturer, it can grab objects, open doors, or even recognize a VIP visitor. It speaks multiple languages and recognizes human emotions. The robot has been deployed in some Chinese hospitals, where it’s been providing useful information, entertaining patients, or even demonstrating stretching exercises to them.

Since coronavirus prevented Tokyo Business Breakthrough University graduates from attending the graduation ceremony this year, it was robots who received diplomas instead of the students. Dressed in graduation gowns and wearing mortarboard caps, dozens of four-wheel “Newme” robots by ANA Holdings rolled down the aisle, with graduates’ faces displayed on tablet screens mounted at the top.

In 2018, OriHime robots by Japanese company Ory Laboratory gave people with disabilities an opportunity to run a pop-up cafe by manipulating robot avatars from home. The cafe was called DAWN, which stands for “Diverse Avatar Working Network,” and was temporarily situated in Shibuya, Tokyo.

Ory Laboratory’s CEO Kentaro Yoshifuji recently posted on Facebook, saying that, since many more people have limited mobility because of COVID-19, OriHime robots could help them explore the world and enjoy human communication. The robot’s face is designed after the traditional Japanese Noh mask that’s been used in theatrical performances since the 14th century. The mask bears a neutral expression, which means it can express a variety of emotions. There is also a business version of the robot available called OriHime Biz.

Throughout the world, patrol robots are being used to enforce quarantines and educate people about the virus in public places. Some of them employ computer vision to detect people without masks or have infrared sensors that allow them to check humans’ body temperature.

Early in the epidemic, Gosuncn Group was one of the first companies in China to provide patrol robots for public spaces. The developer quickly upgraded its 5G-powered police robot to fit COVID-19 needs. The robot, by the name of “Qianxun patrol robot,” can measure the body temperature of up to 10 people at a time with a +/- 0.5 degrees Celsius accuracy. It can also detect if a person is wearing a mask.

In Tunisia, the government deployed patrol robots called PGuards (manufactured by Enova Robotics) to help enforce the lockdown. A PGuard is equipped with a microphone, a loudspeaker, a thermal camera, and a LiDAR. It uses AI to detect pre-set “anomalies” in the area it monitors. Under the current lockdown, when the robot sees a violator, it asks them for an ID and wonders why they’re out. It then instructs people to return to their homes quickly.

A major Chinese e-commerce company, JD Logistics, was quick to deploy self-driving robotic couriers in Wuhan, China – the epicenter of the pandemic – to maintain its parcel delivery business.

A common sight in many U.S. cities is monochrome, orange-flag-bedecked delivery robots by Starship Technologies. Started by two Skype co-founders, the company has been providing these eco-friendly local delivery robots for a few years now. Needless to say, there’s been an increase in demand for them recently.

It seems that timing was right for Qianxi Robotic Catering Group (a Country Garden company) who opened a fully-autonomous robotic restaurant called Foodom in mid-January this year in Guangzhou, China.

The wonder restaurant is said to employ 46 types of robots. It’s different from other robotic restaurants in a sense that it’s not just the customer service that’s automated there – at Foodom, robots cook, welcome customers, take and deliver orders, accept payments, receive deliveries, sort ingredients, and more. The development involved 700+ professionals from various fields, including 11 human chefs who were consulted for this venue.

According to a recent Japanese media report, service robots are being introduced all over the world, and China’s position in the market is looking particularly positive. In 2019, the Chinese Electronics Society predicted that the market size of China’s service robots will reach 2.2 billion US dollars, an increase of 33% from last year. Besides, service robot sales in China are growing at twice the pace of their global sales.

That said, robotics seems to be a particularly lucrative industry at the moment, with many problems to be solved, engineering jobs to be created, and profits to be made.

Image credit: An image of three medical workers walking past a police robot in Wuhan, China / via Reuters Will telemedicine remain a norm after COVID-19?