“eSports” is competing against other players and teams in video games. It is predicted to soon start attracting even larger crowds than “analog” sports like soccer, football, ice hockey, and baseball.

eSports competitions are not that different from traditional sporting events. Everything you need to make them exciting is there: professional players, trophies, and fans. It’s just that eSports athletes use their minds rather than muscles to play.

Fueled in part by the rising popularity of gaming (revenue from which has been increasing at roughly 10% each year), the eSports industry is enjoying a year-on-year audience growth of +11.7%. The global eSports viewership currently stands at 496 million people worldwide. In 2020 alone, there was a 70% increase in the number of eSports viewers in the US, most likely because of the pandemic.

Consulting firm Activate predicts that in the US, eSports will have more viewers than any other professional sports league except for the NFL by 2021. The eSports audience is expected to grow to 796 million global viewers by 2024, a nearly 200% increase from present-day numbers. To give you some context, basketball currently has 825 million viewers globally, with the #1 spot still being held by soccer/football at 4.0 billion viewers. 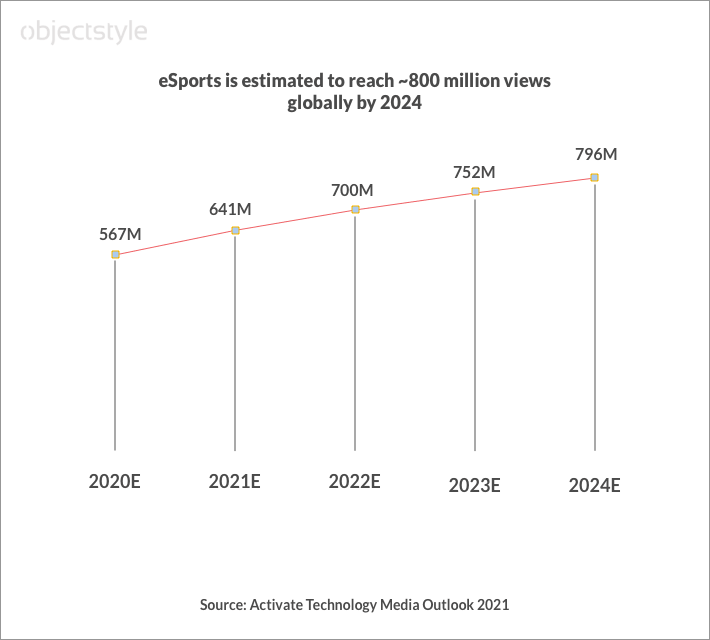 At the same time, 91% of eSports viewers also follow or play traditional sports. If sports leagues take note of this, there may be an opportunity for them to grow their fan base. For instance, FIFA now holds the FIFA eWorld Cup, which is an eSports tournament.

From a geographical standpoint, eSports is very popular in Asia, with the majority of viewers hailing from that part of the world: 51% of viewers come from Asia-Pacific, 18% from Europe, 13% from Vietnam, and 18% from the rest of the world. In terms of game popularity, Dota 2 is more popular with Asian players, while Counter-Strike: Global Offensive traditionally attracts players from Europe. 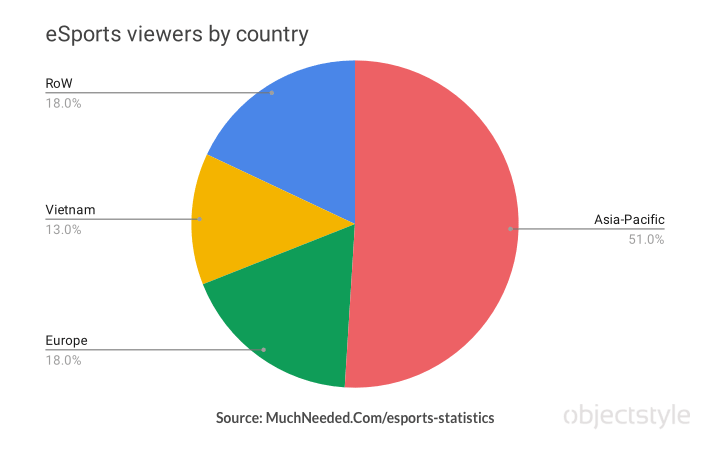 Twitch accounts for 91.1% of live gaming content streaming. Other platforms are YouTube (5.5%) and Facebook (3.4%). COVID-19 lockdowns have led to many people increasing their time on Twitch.

Also read: Top IT service companies that contribute to open-source

How is eSports being monetized?

Now, you may wonder – how do eSports players and event organizers make money? eSports revenue comes primarily from these sources:

According to a report from Activate, eSports revenue is predicted to grow by 17% between 2020 and 2024. It is expected to increase mostly because of the growing consumer spend, which is said to go from $1.7B to $3.3B by 2024.

In the US, eSports is one of the two fastest growing sport leagues, alongside Major League Soccer. But what makes it so popular? Let us suggest some reasons.

Players make a lot of money

In eSports, it’s not uncommon for a 20-something-year-old to be making over $3,000,000 per season, like Topias Taavitsainen from Finland did in 2019. This year, the International 10 Dota 2 championship has a prize pool of $34,333,874, with the contestants potentially pocketing several million dollars each. By comparison, winners of the Super Bowl normally make something like $100,000 per player.

With much better Internet connectivity these days, producing high-quality tournament streams has never been so easy. Game finals begin to resemble those of traditional sports games more and more, and professional commentators are now on par with old-school sports reporters.

Video games are played all over the world, so eSports athletes may come from any country or culture. This creates a truly global market for all the participants in the niche: players, tournament organizers, sponsors, and spectators.

No longer the “wild west”

Bit by bit, the diverse and chaotic world of eSports tournaments is becoming more regulated and standardized.

According to Hotspawn, “for esports, franchising is still new and somewhat alien, but is becoming the norm”, with titles like Overwatch, Call of Duty, and League of Legends now forming franchise leagues. “Official” leagues backed up by respective game creators instill a greater sense of stability and confidence in teams and sponsors.

An annoying problem of eSports, hacking and cheating, is now being addressed in an all-encompassing and systemic way. And with sponsors and investors catching wind of eSports’ rising popularity, it’s likely to become even more polished and professional in the near future.

Data suggested that eSports is a fast-growing industry that has shown no way of stopping so far. In the past five years, eSports has grown significantly in terms of viewership and revenue. If things proceed at this pace, it will soon catch up with traditional sports in many ways.

Right now, the value per fan may not be very large in eSports (in many areas, relevant stats seem unavailable). But as viewership increases and sponsors/investors take note of the new opportunities, that may change. 10 Ideas for Boosting Sports Fan Engagement During the Pandemic Smart sports stadiums are coming: they let fans control the viewing experience like never before